“Once a woman is empowered socio-economically, the whole society and future generations directly benefit.” 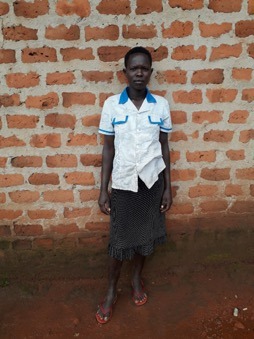 Lucia Achola is a teenager and a resident of Oyam Town Council. She is one of the many youths in Lango Sub region of Northern Uganda who are facing numerous obstacles and challenges such as unemployment, becoming a victim of domestic violence and limited training and resources to start a small business for self-sustenance.

Lucia heard about a women’s group in Oyam Town Council and she was excited to hear what women in her neighbourhood were meeting to discuss. To her delight, the discussions where focused on empowering women. The group talked about different small business opportunities and how to begin saving money from the profits. Lucia knew she was in the right place and would eventually enrol as a member of Orib Cing Youth Group. Orib Cing Youth Group is one of the groups WNSP actively supports through the “Innovations for Women Empowerment” Project.

“Orib Cing” is a Lango phrase which directly translates as “Combine Hands”. Lucia signed up for the Village Saving and Loan Association. She then created a business idea which the group helped her think through and eventually acquired a loan from the group to launch her business. Lucia acquired a loan of UGX15,000 and used it to start maize roasting and selling of groundnuts paste. The funds were needed to purchase maize roasting equipment and to grind her first batch of groundnuts. Her expectation was that such a business would require very little start-up capital and running costs and could produce a steady income. Her business idea became a success. On a typical good day, she receives up to UGX12,0000 from maize roasting and UGX5,000 from selling ground nut paste.

In addition to the loan she received to start up her business, Lucia also attended group trainings on kitchen gardening. She secured about quarter an acre for a kitchen garden. She grows vegetables, fruit, and some horticulture crops. These she uses for household consumption as well as to sell for additional income. She learned how to construct cheap and locally effective irrigation technology such as “drip kits” and mulching which allows her kitchen garden to be a year-round business. Through these approaches she saves time, has improved crop yields, extended the growing season and conserves water.This has helped her improve her households’ nutrition while also importantly increasing income generation.

Overall, this WNSP sponsored group has empowered Lucia and her fellow members to conceive, plan and launch successful small business that enable them to be financially independent as well as contributing to household and family’s needs. Through learning the principle of saving some of their income, they are also able to provide for the future even in difficult seasons.